As children we often hear the lyrics to our favorite music anyway we want to, regardless of the meaning. Hearing a child's interpretation of a popular song, or saying is always magical. In this short, a seasoned wizard learns this lesson while teaching his child her first spell.

We used my old Panasonic g85, an even older minolta 55mm lens, and an older still Schneider Cinelux 2x Anamophic lens. I used a pair of lavalier mics to record onto an old cellphone, with a Takstar directional mic on the camera as a backup. (Thank god I did.)  Edited in Resolve.

I think she may have the actor's bug. Sadly, she has lowly me to act against---tried to keep my input to a minimum!

All music is from Filmstro.com Go there! Now!

What an awesome ride! Zach and Lukas over at CGChallenge really ought to be commended for starting this awesome tradition. If you had asked me a month ago if I would be open to sculpting anything, I would have laughed in your face. I have always viewed myself more an animator than anything else. I think I will always see things in motion, but it was such a refreshing and exciting treat to challenge myself in this way. I am definitely going to continue and finish out the 31 sculpts, since the time is up, but I have truly learned so much, and I've definitely gotten a bug to do more. I'll have to start getting into the weekly challenges!

I compiled the 20 I managed to sculpt in this post so the team could quickly see what 20 I completed. For larger images and WIPs please check out my Sculpt January 2018 Artstation Album. Until next time! 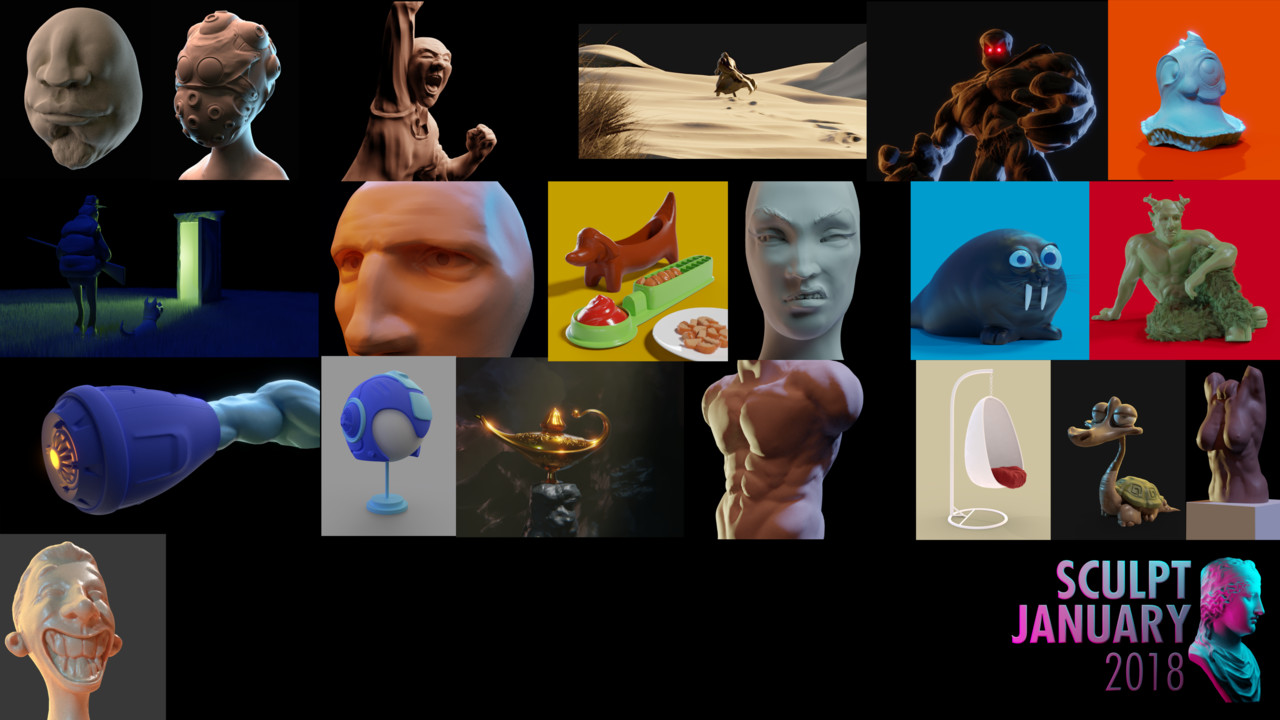 3d Studio Max Particle Flow (PFLOW) workflows to instance objects on a surface and drive the density of those objects can be incredibly slow for me. It always happens when i realize that ‘vanilla’ PFlow requires a “speed by surface” and a “lock / bond” two built-in operators that have always been inexplicably slow in my setups. (Full disclosure---this could all be my fault!)

At any rate, in the past I’ve abandoned using normal PFlow and just done matrix transformations and other trigonometric functions, in order to get instanced objects / particles to stick to an emitter object’s surface and align to its normals. I've seen other packages achieve this with seemingly simple steps.

Imagine my surprise when I checked out this tutorial:

Well, I suppose I knew about hair and fur in Max, but I don't think I ever thought about using outside the box in it, like Blender or Maya--where I am constantly reminded that I've just been doing it wrong, haha.  I had a few questions to explore in hair and fur:

Basically follow the tutorial above and replace the object with a custom object here:

That’s literally it. The variety can come from within the hair and fur itself, also covered in tute.

How about Density maps? Here:

Just drop your map in the blank box to the right of the Density Spinner.

The above image is clipped in the screen grab, but its under the 'dynamics' tab. Also, for something wild check on that live and see the grass react in realtime 0.0. To use the “precomputed” for advanced or heavy sims, that’s where the “stat” files work. Then you set start and end and click ‘run.’

Another case of me just approaching a problem with a jackhammer, when I needed a hammer.